Did you know that the Philadelphia Eagles were a “green” organization? Well, everyone knows their color has been green starting with the 1948 NFL championship team, but now we’re talking about green, as in sustainability.

Ben Block, marketing and communications specialist for Clean Markets, chose the green Eagles as the subject for his case study for the Feb. 23 Sustainable Business Network’s of Greater Philadelphia (SBN) quarterly Best Practice Forum: Branding and Messaging for the Sustainable Business, held at WeWork Market Street in the Five Penn Center building in Center City Philadelphia. In using the Eagles’ sustainability initiatives as a starting point to discuss best messaging practices for promoting a sustainable business, Block kicked off a lively discussion among the assembled SBN members and panelists Sharon Gallagher (Sage Communications), yours truly

The SBN community is comprised of members dedicated to incorporating sustainability into their mission. However, they face a significant challenge when communicating values to customers and the public. Thus, to help differentiate themselves as authentic and principled, SBN members need to develop a communication strategy that seamlessly incorporates their sustainability practices and goals into their brand. Block and his fellow panelists were tasked to help the forum’s participants develop plans that communicate these efforts in a way that resonates with current and prospective customers. In addition to his Eagles case study, Block also presented data on branding strategies used in the energy efficiency and green building industries.

One issue that the Eagles’ study brought up was that of messaging outside of an organization’s main or central brand… both the “why” and the “how” of such messaging. The Eagles are, of course, a professional football team, near and dear to the hearts of uncounted thousands in the metropolitan Philadelphia area. However, as popular as the Birds might be, they are not personally relevant to every Philadelphian, as several of the forum’s attendees pointed out (no, they weren’t Dallas Cowboys fans, they just didn’t follow football). Thus, the motives for Eagles’ sustainability efforts (as with all of the rest of their community engagement and involvement efforts) could well track to making the team more personally relevant outside of their main brand, a separate message that needs to be made distinct from the 53 players on the field.

Some of the other highlights of Block’s presentation, and the ensuing discussions, in addition to the concept of the necessity of making a brand personally relevant to as many audiences as possible, included another basic issue for SBN members, the fact that ecological  and financial sustainability is still not universally understood. As is the case with many branding-related issues, the techniques to overcoming can be summarized in a run-on sentence… you need to use authentic storytelling with short-term imagery, and it doesn’t hurt to have fun in the process.

Simple, right? OK, maybe not so simple. If you want to know more about authentic storytelling with short-term imagery that also incorporates some fun, check with Michael Kleiner Public Relations and Web Design and mention “Kiwi Shoe Polish” for a discount. 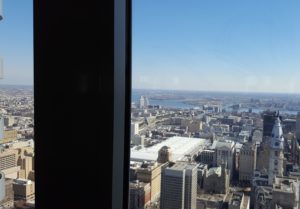 With technology continually changing the way we access news and how news organizations gather it, learning pitching tips for public relations pros never gets old. More than 80 Philadelphia Public Relations Association members agreed, and attended Broadcast Media Panel Offers Tips for Getting Your Stories on the Air on Feb 17 from the Pyramid Club’s 52nd floor perch overlooking the city. (Considering PPRA unveiled its new logo with the Philadelphia skyline in the back, the view was apropos.).

The panelists included four from TV: Iris Delgado, Anchor/Reporter for Telemundo62; Jodi Harris, Planning Manager/Producer Fox29; Stephen McKenzie, Managing Editor of CBS3 Eyewitness News, and Tim Walton, Producer Programming Department  FYIPhilly WPVI6, and two from radio: Paul Kurtz, Reporter at KYW Newsradio 1060, and Eugene Sonn, Audio News Director WHYY-FM. Susan Buehler of Buehler Media and Chief Communications Officer for PJM Interconnection, which coordinates electricity supply to 13 states, brought some of that energy to moderating the discussion. She did an excellent job of balancing the questions the audience would have for the media members and what they needed to tell us, and injecting humor along the way. Sometimes, these sessions can devolve into “pet peeves journalists have about PR people” and we feel like we’re being scolded. That wasn’t the case here.

Based on my and other tweets, here’s a summary of what the panel shared. McKenzie emphasized that a story must fit multiple platforms. “I have to decide what I think our viewers care about, and it has to fit on the air, on the Web, and on social, three platforms. It must have compelling video.”

The best times to pitch varied depending on when the station’s editorial planning meetings were scheduled during the day, and in the case of Delgado, who anchors a 5 p.m. newscast, “please don’t call me 15 minutes before I go on the air.” Good times to talk to her are between 1 p.m.-2:30 p.m. before the 3 p.m. meeting. She will follow-up around 10 p.m. as she plans the stories for the next day.

MacKenize said between 10 a.m. and 10:30 a.m. and 1:30 p.m., while Harris said, “pretty much anytime. I always have my phone. For bigger stories on lighter topics, contact me a few weeks in advance.”

Sonn echoed reporters’ complaints for generations: “It’s annoying when someone is pitching and has never seen the show, and the story doesn’t fit.” He added, “Around 2 p.m. is a good time to call. Think about times of the week that might be slow and you might have better luck with your pitch.  The story has to fit into 45 seconds.”

Kurtz said he prefers to be contacted by e-mail first, followed by a tweet through direct messaging, but the successful pitch can come down to luck and opportunity. ” It’s all about timing,” he said. “If you have an expert, who can speak on a current topic that’s helpful. Try newstips@kyw1060info.com to get ideas to us.”

For TV, Harris says, “The person has to be good on TV. Sometimes, we’ll look for an expert who we haven’t talked to before.”

Delgado said there’s a misconception about Spanish media. “Telemundo 62 covers what is in the English media in Spanish,” she said. “A Hispanic angle is important.

“Whatever the emotional, human angle may be, your pitch might be the best backup plan when another story falls through,” she added.

Walton, who works at FYIPhilly, says their demands are different. “We’re not a news show so there’s more open times to pitch,” he said. At the same time, he is currently accepting summer pitches.

They all chorused when Buehler said, “Keep it simple and brief: Headline, one paragraph. You need to have thick skin and keep trying if your first e-mail doesn’t get a response.”

The use of the Internet – should we be pitching web editors, too — and social media drew some interesting responses.

Kurtz said the web has enabled them to do more with their stories. “While you may get a short amount of time on the radio, we put more copy on the Web and create podcasts, which are archived.  I covered the protests at the Democratic National Convention on Facebook live, the first time I used it.”

“Social media has broadened our audience beyond Greater Philadelphia,” said Sonn. “If you have a pitch with an expert who has a good social media following, mention it.”

There are exciting developments at Michael Kleiner Public Relations and Web Design. Michael is reuniting with long-time friend and early mentor, John Shiffert to create a team offering editorial services and/or web design to membership associations and organizations. Why? Because the universal question from members of an organization is “What am I getting for my dues?” We plan on providing that answer by providing valuable editorial services to the associations themselves and then for the members.

You will be benefiting from two experts in communications — marketing, branding, communications, the web, PR and diverse writing/editorial experience over different platforms, and we understand Marcomm and the challenges presented to non-profits, especially associations, in delivering first-rate, to say nothing of adequate, communications-related services. While a dearth of professional expertise can be an issue, almost no one has enough staff to support the Marcomm needs of client associations AND their individual members. In today’s world, we are told technology is making things easier. What it has actually done is expand the possibilities in Marcomm and put more demands on our time to meet those opportunities and challenges. There are blogs, Facebook pages, tweets, e-mail newsletters, media kits to develop and update. There are probably more publications on the Internet than in “hard copy,” not surprising since there are literally a billion web pages on the Internet. Every time one turns around, there is another social media site popping up. Let us help you meet the challenge and participate in the 21st century communications world.

Many moons ago, Michael Kleiner and John Shiffert worked together. When Mr. Kleiner was a student at Germantown Friends School, he covered the school’s sports teams for the weekly newspaper Germantown Courier. Mr. Shiffert, an earlier graduate of GFS, was one of his Sports Editors at the Courier. Both shared and continue to share a passion for writing, sports statistics and history and left a similar indelible mark on the school–for those who remember. Now, they are becoming a team again, as the subsequent moons have given them a wealth of experience in journalism, writing, public relations, marketing, web design, publications, communications, editing, non-profit and association management, integrated marketing/branding and teaching in the areas of sports, education, small business development and management, healthcare and publishing.